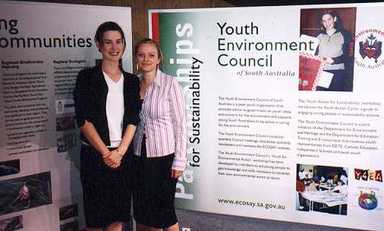 Many of the students involved were members of environmental groups in their own school or community and had recognised the need for sustainable living. At the forum they attended workshops about the environment, took part on panel discussions and developed ideas for how they could help the environment.

During the closing ceremony they presented to the Hon. Mr Rob Lucas, (Former) Minister for Education and Children’s Services and the Hon. Mr David Wotton (Former) Minister for the Environment and Natural Resources.
At the end of the Forum, both Ministers jointly announced to the students the formation of the Youth Environment Council (YEC), a joint Department for Education and Children's Services (DECS) and Department of Environment and Natural Resources (DENR) initiative. The main purpose of the YEC was to advise the Government on youth environmental perspectives and replace the Youth Environment Network of South Australia which had operated through DENR for the previous three years (1994-1997).

A group consisting of DENR and DECS staff and students in Yrs 4–12 was set up to plan the formation of the YEC. The job of this planning group was to provide advice on the extent of the role of the new council, who should be represented on it, and the meeting dates for the remainder of 1997 and 1998*.

The group recommended that the YEC should have membership ranging from 10 to 25 years old and that its purpose would be:
In 2010, the YEC became an initiative of the Department for Education (at the time called the Department of Education and Children's Services) and the Adelaide and Mount Lofty Ranges Natural Resources Management Board (now Green Adelaide).

The YEC is now a state-wide network for like-minded Yr 7-10 students to learn, share and be inspired about sustainability.  The YEC provides workshops to give students the skills and knowledge to run their own environmental action projects in their schools and local communities. To view the latest YEC Annual Report, please click here. For the Where are they now? 20 years of the SA Youth Environment Council report, please click here.