The Barossa’s two YEC students decided to create a regional event around native bees. Their aims were twofold: to raise awareness of the importance of native bees; and to have an on-ground impact by constructing native bee hotels.

With this in mind, the two students started networking to promote their idea. They spoke with their teachers and got their respective schools interested in being involved: suddenly over 50 Year 7 students from both schools were booked in to construct native bee hotels at our planned workshop. Then the two YEC students decided there was a need for a guest speaker at the event and moved right out of their comfort zones by contacting several native bee experts, eventually engaging a speaker. Hence we had the ingredients for an exciting day: the makings of a hands-on workshop; and a guest speaker to enthuse students.

Next the two YEC students met with their NRM Education Officer each week during lunch for a number of weeks planning and refining the day; their chosen guest speaker was invaluable in advance, sharing her experience via email regarding the structure of the actual workshop as well as the materials they needed to collect to construct the native bee hotels, and we gathered together large bundles of bamboo, vine cane and common reed, as well as recycled timber for the roof section.

The actual event was held at Tanunda Primary School and was a huge success: some 43 native bee hotels were created on the day and nearly 90 students took part; in addition the outdoor workshop aroused the curiosity of just about every Tanunda PS student during recess and lunch and the students held an impromptu lesson to one class which had expressed interest on the day.

Having now created so many native bee hotels, the question arose of how best to spread them around the Barossa for optimal biodiversity benefit. NRM Education Officer Chris Hall suggested that the native bee hotels could be hung to best advantage in trees within the Tanunda Urban Forest site, of which Tanunda Primary and Faith Lutheran College, the two participating schools, both form a part. Tanunda Urban Forest is a strategic Barossa Council/community/NRM project to enhance and protect urban greenspace centering around and buffering a heritage-listed Native Pine woodland.
The most pleasing aspects of this Regional YEC Event were: 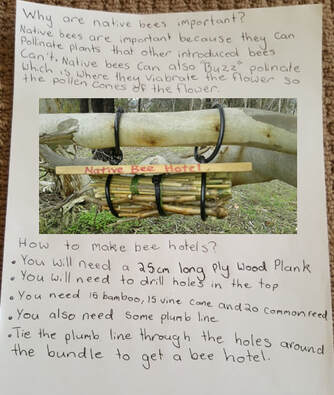